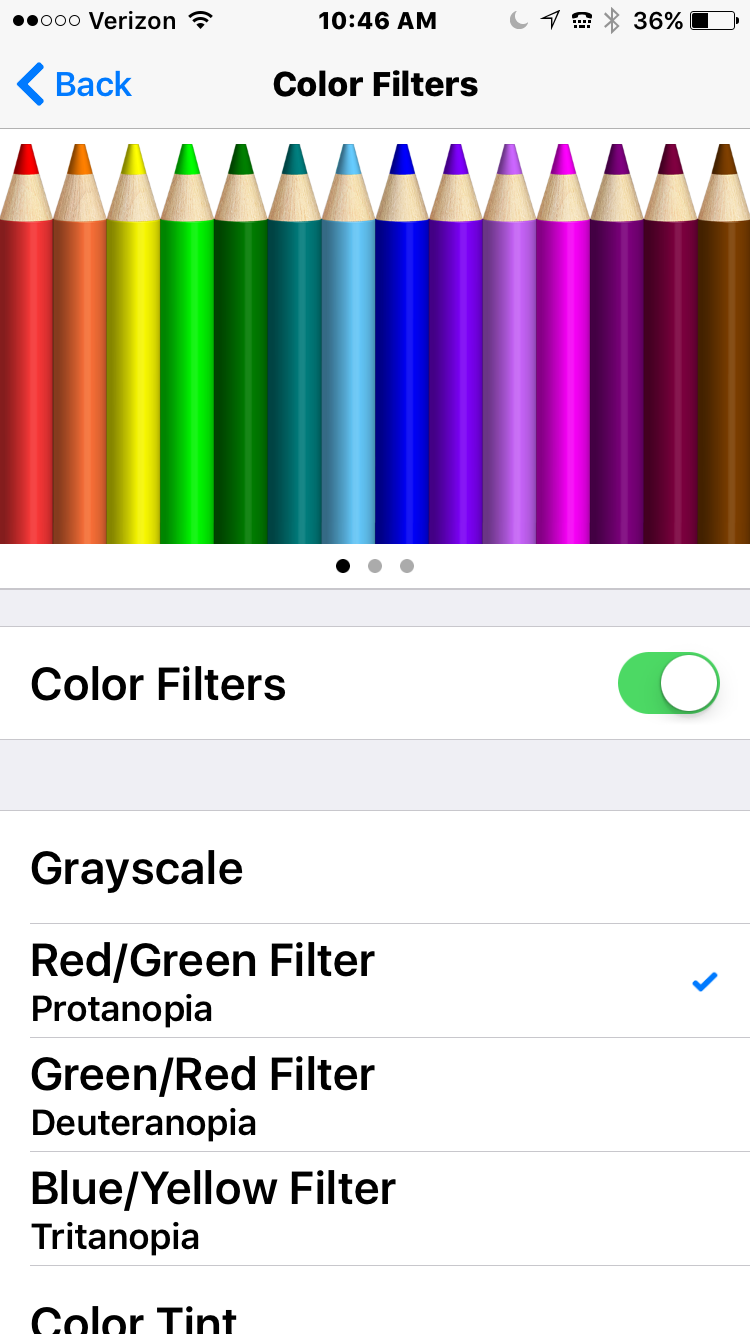 4 New Accessibility Features of iOS 10 You Should Know

Apple today released iOS 10,  the latest version of its operating system for mobile devices such as the iPad and iPhone. This post is a quick review of some of the most significant enhancements to the accessibility support in iOS 10, starting with a brand new feature called Magnifier.

With Magnifier, users who have low vision can use the great camera on their devices to enlarge the text in menus, pill bottles, and other items where they might need a little support for their vision to read the content. Magnifier is found alongside Zoom (which enlarges onscreen content) in the Accessibility Settings. Once it is enabled, you can activate the Magnifier by triple-clicking the Home button.

While a number of existing apps such as Vision Assist and Better Vision provide similar functionality, having this functionality built into the OS should improve performance (through faster focusing, better clarity made possible by accessing the camera’s full native resolution, etc.). Magnifier has the following options:

The available filters include: white/blue, yellow/blue, grayscale, yellow/black, and red/black. For each of these, you can press the Invert button to reverse the colors, and you can do this while in the live view or with a frozen image. Each filter also provides a set of sliders for adjusting the brightness and contrast as needed.

Display Accommodations is a new section in the Accessibility Settings that brings together a few existing display options (Invert Colors,  Grayscale, Reduce White Point) with a couple of new ones (Color Tint and and options for three different types of color-blindness). 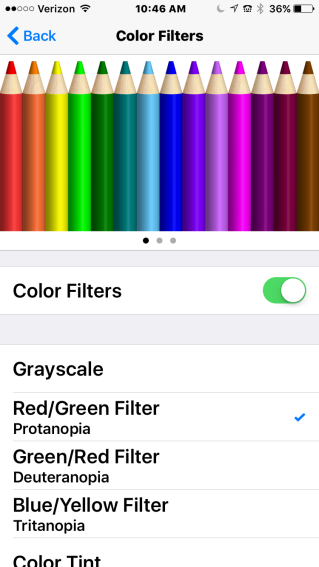 For those who have Irlen Syndrome (Visual Stress) there is a new option in iOS for adding a color tint over the entire display. Once you choose this option, you will be able to use a slider to specify the intensity and hue of the filter.

A new Typing Feedback setting can help you if you find you are often entering the wrong text. You can choose to hear the last character or word you typed (or both). For the character feedback, you can specify a delay after which the character will be spoken and even whether a hint (“t, tango”) is provided. An additional setting allows you to hear the QuickType suggestions read aloud as you hover over them, to make sure you are choosing the right prediction.

The entire Speech system also can take advantage of some additional high quality voices: Allison, Ava, Fred, Susan, Tom and Victoria for U.S. English. Some of the voices (such as Allison) have both a default and an enhanced version as has been the case with previously introduced voices, and you preview each voice before downloading it by tapping a play button. An edit button allows you to remove voices you are not using if you are running low on space (you can always download them again).

I’m sure the team at AppleVis will do a complete rundown of VoiceOver in iOS 10, so here I will just highlight one feature that I am really happy about: the new Pronunciation Editor. After all this time, I can finally get VoiceOver to get a little bit closer to the correct pronunciation for my name (the accent in Pérez still throws it off a little).

The Pronunciation Editor is found under VoiceOver > Speech > Pronunciations. Once there, you will press the Add (+) button, enter the phrase to be recognized and then either dictate or spell out the correct pronunciation. You can restrict the new pronunciation to specific Languages,  Voices and apps or choose All for each option for a more global availability.

In addition to the pronunciation editor, VoiceOver can take advantage of all the new voices for the Speech system in iOS 10: Allison, Ava, Fred, Susan, Tom and Victoria for U.S. English (each with an enhanced version). Like the Alex voice, you will have to download each of these new voices before you can use it, but you can  preview each voice before downloading it.

These are just a few of the new accessibility features in iOS 10. Others include:

And of course, there are other enhancements to the rest of the Apple ecosystem which I will cover in their own blog posts as they become available: Siri for the Mac, Taptic Time for Apple Watch, new activity settings on Apple Watch for wheelchair users, and more.

Finally, there is the new hardware Apple just announced last week, which will soon be shipping. Apple Watch has a faster processor and a better display (helpful for those with low vision), and the iPhone 7 and 7 Plus come with even better cameras (12 MP, with two cameras for 2X zooming on the larger model). As both a visually impaired photographer and as someone who focuses on accessibility features that use the camera (Magnifier, Optical Character Recognition apps to convert print into digital content) this is very exciting.

What are your thoughts on Apple’s recent announcements? Are you upgrading to the new devices? Which features have you most excited?

Luis Pérez is an inclusive learning consultant based in St. Petersburg, Florida. He has more than a decade of experience working with educators to help them integrate technology in ways that empower all learners. Luis holds a doctorate in special education and a master’s degree in instructional technology from the University of South Florida, and he is the author of Mobile Learning for All: Supporting Accessibility with the iPad, from Corwin Press. Luis has been honored as an Apple Distinguished Educator (ADE) in 2009, and as Google in Education Certified Innovator in 2014. He is also a TouchCast and Book Creator Ambassador. Luis currently serves as the Professional Learning Chair of the Inclusive Learning Network of the International Society for Technology in Education (ISTE), which recognized him as its 2016 Outstanding Inclusive Educator. His work has appeared in publications such Teaching Exceptional Children, Closing the Gap Solutions, THE Journal, and The Loop Magazine. In addition to his work in educational technology, Luis is an avid photographer whose work has been featured in Better Photography magazine, Business Insider, the New York Times Bits Blog and the Sydney Morning Herald. Luis has presented at national and international conferences such as South by Southwest EDU, ISTE, CSUN, ATIA and Closing the Gap. View all posts by Luis Pérez, Ph. D.