A new Apple TV Remote app is now available for download from the App Store. The main difference between this new app and the existing Remote app (which you can still use to control your Apple TV) is the addition of Siri functionality.  With the 4th generation Apple TV, you can press and hold an onscreen Siri button in the app to speak Siri requests on your iOS device that will be understood by your Apple TV. This works just like it does when you press and hold the physical button on the 4th generation Apple TV Siri remote.

Setup was a pretty simple process. Upon launching the app, it quickly recognized all of the Apple TVs on my Wifi network (I have one of each generation) and showed them as a list. After I tapped on the device I wanted to control, I was prompted to enter a four digit code shown on the Apple TV (and automatically read aloud by VoiceOver) and that was it: my iPhone was paired to control my Apple TV.

The app has a dark theme, with great contrast, throughout. As someone with low vision I can say the the options on the app are much easier for me to see than the dimly labeled buttons on the physical Apple TV remote.

The screen is divided into two sections: the top two thirds make up a gesture area that simulates the touch pad on the physical remote, while the bottom third includes onscreen options for the buttons. If you can see the screen on your device, right away you will notice the Menu button is much bigger than the other buttons. This is actually a welcome design touch, as the Menu button is one of the most frequently used options for controlling the Apple TV. Below the Menu button, you will find options for Play/Pause, Home, and Siri from left to right.

I tried to test the app with Dynamic Text (large text) enabled. This only made the text in the devices list (which lists all of your Apple TVs) bigger. It would be nice if Dynamic Text worked on the label for the Menu button as well, but with the bigger button and high contrast look, this is just a minor point.

You control the Apple TV by performing touch gestures in the gesture area at the top of the screen. When you come across a text entry field, the onscreen keyboard will come up automatically to let you enter the text (same as on the older Remote app). If you tap Done to dismiss the onscreen keyboard, you can bring it back by tapping the keyboard icon at the top of the screen.

With games, you can tap a game controller icon at the top  of the screen to change the layout of the app for game play. With the iPhone in the landscape orientation and the Home button to the right, the left two thirds of the screen will be a gesture area and the right one third will include  Select (A) and Play/Pause (X) buttons – surprisingly these are not labeled for VoiceOver. Tapping Close in the upper right corner will  exit out of the game controller mode to the standard layout. 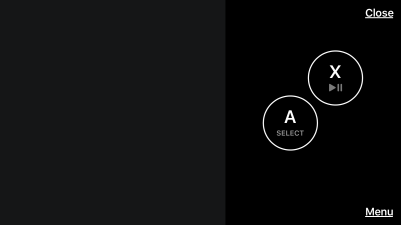 From the one game I tried with the app, Crossy Road, I don’t think it will be a good replacement for a dedicated controller. There was just too much lag, probably due to the Wifi connection the app uses to communicate with the Apple TV. It may work with some games where timing is not as crucial, but definitely not Crossy Road.

Zoom will work just like it does when using the physical remote: a quick triple tap on the gesture area will zoom in and out. The one issue is that the gesture area on the app does not accept two finger gestures. As a result, you will not be able to:

The same limitations hold for VoiceOver. You will not be able to access the Rotor gesture on the Apple TV Remote app. Furthermore, the following gestures will not be available:

For Siri, you will have to perform a standard gesture (double-tap and hold) so that you can speak your Siri request.

One interesting thing about using VoiceOver with the new app is how you access the Accessibility Menu. When you select the Menu button it will announce “actions available.” With a one finger flick up or down you can access the two actions: the default, which is “activate item” or “accessibility menu.” Depending on how you have your Accessibility Shortcut set up in the Apple TV settings, selecting the “accessibility menu” option will either toggle on/off one of the features or bring up the accessibility menu to allow you to choose.

I was not able to use the new app to control my Apple TV with Switch Control. The problem is that when Switch Control goes into the gesture area it does not recognize my input as I try to select one of the direction arrows to move the cursor on the Apple TV. This could very well be a bug that is fixed in a future update. In the meantime, you can continue to use the older Remote app if you need Switch Control to use your Apple TV.

In any case, Apple has promised to include Switch Control when tvOS is updated in the fall. This will be different from the current implementation in that the scanning cursor will actually show up on the TV and the iOS device will act as a switch source (at least as I understand it from my online reading, I have not been able to update my Apple TV to the latest beta). 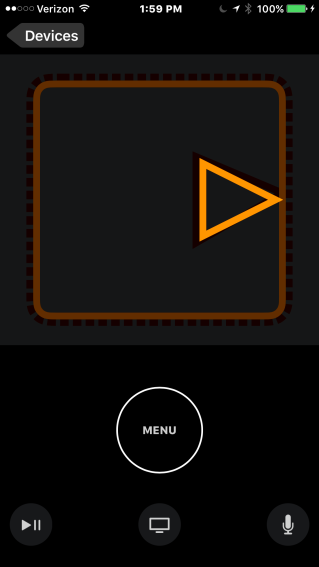 To be honest, I don’t use the included physical remote for my Apple TV all that much. It is just too small and easy to misplace for me. I actually have my existing TV remote (which I am very familiar with) set up to control my Apple TV, and I also often use the older Remote app on my iPhone for the same purpose. With those two methods I was not able to use Siri, but now that has changed. I see myself using Siri a lot more with this new app, especially for searching on the Apple TV.

There are a few limitations that keep this app from being a full time replacement for the physical remote if you use Zoom and VoiceOver, but I anticipate that those will be addressed in future updates.

Are you using the new app? Let me know your experience in the comments, especially if you are using it with Zoom or VoiceOver. I would love to hear how it has worked out for you.